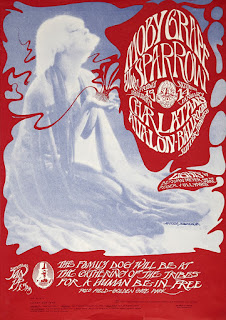 Right,  this is the last of the ancient tracks in this series, for a while anyway, I promise. From next week it will at least be something from this century but first here is a great piece of improvisation from one of the nearly were bands of the psychedelic era. Moby Grape were formed in 1966 by the ex drummer and the manager of Jefferson Airplane and also included in the line up were Jerry Miller and Don Stevenson of The Frantics, Bob Mosley and Peter Lewis. The original line-up was short lived and by 1969 and after two albums after Skip Spence was incarcerated after increasingly erratic behaviour after being turned on to LSD, The story of the band is one of bad timing, poor decision making and shit luck. One example was that they played by all accounts a great set at Monterey which although recorded on tape and film was cut from D.A. Pennebaker's Monterey Pop film  as Katz wanted 1million dollars for the rights to their performance, also they were moved from opening for Otis Redding on the Saturday night to sunset on the Friday night when hardly anybody was there, The footage was shown eventually in 2007 as part of the 40th anniversary celebrations of the Pop Festival.

Dark Magic is quite an incredible bit of psychedelic guitar rock but is even more impressive when you consider that it a live improvisation around  the very briefest of sketches of a song by a group of musicians who had been working together for less than 6 months when this was put on tape at the Avalon Ballroom on New Years Eve 1966.