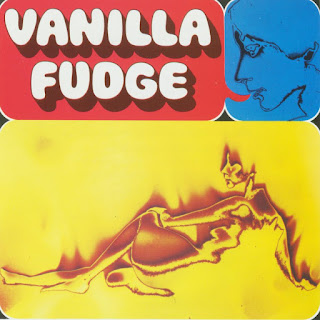 One of the best things about trying to find long songs for a Monday has been that I have had to revisit a lot of the music that I was introduced to in my early teens before I became a bit of a music snob and turned my back on all of the proggy/ hippy stuff that Lex, Jim and others introduced me to. A lot of this stuff easily met the criteria for this feature and I think this is why I love tracks that go on for some time as I was used to listening to lengthy tracks from quite an early age. Don't get me wrong some of the stuff I have gone back to and listened to have been real rubbish, quite a few falling into the "meandering pish" category but others have had me chastising myself for not listening to them for so long.

I have only ever owned one Vanilla Fudge album, the first one and never felt the need to own anything else, the album consists of 7 cover versions, 6 of which last a lot longer than the original versions and on the whole work pretty well. The pick of the bunch and which in single form broke into the top twenty on both sides of the Atlantic was their version of the Supremes You Keep Me Hanging On, before I got really into soul when I was about 15/16 this version of the Holland-Dozier-Holland song was the one I was more familiar with, I had probably heard the original first on the radio but this slowed down, strung out version with the weird organ intro was the one I knew best. It's probably been ten to fifteen years since I had heard it up until a few weeks ago but it has been played half a dozen times since then.

Vanilla Fudge like so many of the bands form that era have re-formed and released an album in 2015. The band were an influence on the likes of Led Zeppelin, Deep Purple and the like which you may thank them for or not and have been seen as one of the bands that links psychedelia to Heavy Metal.

Vanilla Fudge - You Keep Me Hanging On
Posted by drew at 08:00

Given the right circumstances I'm quite partial to a bit of meandering pish actually. This version of 'You Keep Me Hanging On', however, is neither meandering or pish. Vanilla Fudge are one of those big name bands that I've somehow managed to learn next to nothing about, but I like the sound of this very much. A definite influence on Purple.

Swede - forgot to mention that Shadow Morton produced the band