The Genius of Michael Head Part 1 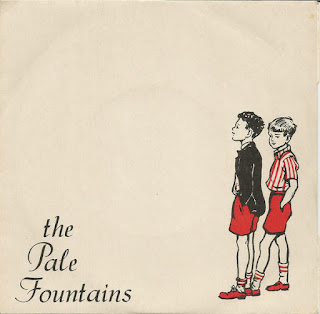 A few weeks ago when posting a track from what I think is Shack's best album, Waterpistol that I was considering revisiting main member Mick Head's back catalogue. So here we go, and predictably enough we will start at the beginning.

(There's Always) Something On My Mind was the first single by Mick Head's first band, The Pale Fountains. The line up of the band included his brother, John on guitar, Andy Diagram on trumpet, who would later go on to be a member of James, Chris McCaffery on bass and Thomas Whelan on drums. The single was released on the Independent  Belgian label Les Disques du Crepuscule and off shoot Operation Twilight back in 1982. Although the single failed to grab the attention of the record buying public, the sound, in which you could hear the influences of Love, Burt Bacharach and of course coming from Liverpool, the Beatles pricked the attention of the A&R men from the majors and before the band's next single they would move onto a major label.

The Pale Fountains - (There's Something) On My Mind
Posted by drew at 09:01

I have to ask... do you own the single on Les Disques du Crepuscule? This has been on my shopping list for many many years. Out of my price range. I do have it on a compilation. I like the Les Disques du Crepuscule version more than the one on Pacific Street which is, I believe, the one you are playing today. Do I have that right? Looking forward to this series, Drew. I have big gaps in my knowledge of Head's later work.

I'm trying to sort out the different versions. I'm going to send you the one I have always thought was on Les Disques du Crepuscule. I may have it wrong.

Alas Brian, I don't have the single, as I never got into the Paleys until 1987 and even then couldn't get my hands on a copy. It's on my list too but I don't think that it warrants the £50+ price tag. You rightly point out the version posted is the one from Pacific Street.

[rubs hands together vigorously] THIS WILL BE FUN!!
Flamenco guitar, Bacharach/David influenced phrasing, the straining, urgent voice and ghostly background vocals, and those strings at the end! So complex, yet simple and beautiful. What a debut!

Looking forward to this as je has hardly made a mistep qualiry wise ...