Toast To The Lady 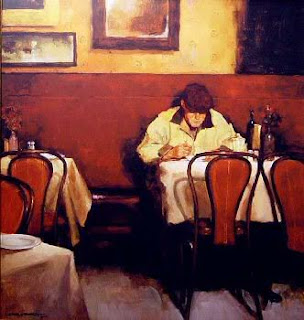 What seems like a lifetime ago I compiled a tape (a compilation, not a mixtape as no mixing was involved) titled "Table For One" comprised of soul/northern soul break up songs. I know what your thinking, aren't the vast majority of soul songs concerned with the dissolution of romances. Well a heck of a lot of them are. For this tape I wanted to start from the dawning that the affair or whatever was on the road out  through the separation, the anger and finally the acceptance and getting over the whole thing, I can't remember the full track listing at the moment and I don't have have a copy of the tape more's the pity but it did include No One There by Martha Reeves, The Night The Angels Cried. and finished with I Walked Away by Bobby Paris where I imagined the protagonist after just more than the right amount of wine getting up and walking away from his table for one with that " fuck it, I'm fine, she 's the one who will regret it" feeling,  the one that would inevitably be gone the next morning when he was alone with just his hangover for company but at that moment he felt he was "over her".

Toast To The Lady, the flip side of Just Call On Me, released in 1964 on Tollie Records the Vee Jay subsiduary was the inspiration for the said tape. Well that and sitting alone at a table in the Newcastle Malmaison after just the right amount of alcohol. I have posted this song before after sitting listening to it one night and noticing the similarities to Burt Bacharach and Bob Hillard's Any Day Now but when I played it again in the early hours of yesterday morning I could hear a resemblance to another song more of which tomorrow.

Eddie Wilson - Toast To The Lady

Sounds like quite a tape. Let's all raise a glass to Eddie too. That song is fine.