Honey Child What Can I Do? 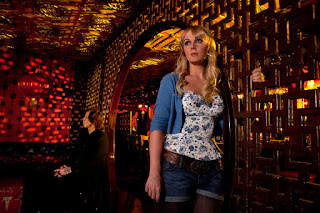 On the first couple of times I saw Isobel Campbell perform Ballad of The Broken Seas, Eugene Kelly did a sterling job of filling in for Mark Lanegan and we were treated to a rather fine version of Son of A Gun by The Vaselines. I say that Kelly did a great job that was until the first time I saw Lanegan with Campbell which changed my opinion completely not by anything Eugene Kelly had down, it was just that he wasn't Mark Lanegan who although saying very little and moving even less filled the stage with his presence and you had the impression that Campbell was in awe of him. I know that L was more than a little impressed and taken by him. Here are two examples of Honey Child What Can I Do for you to compare and contrast.

Isobel Campbell & Eugene Kelly - Honey Child What Can I Do?

Isobel Campbell & Mark Lanaegan - Honey Child What Can I Do?
Posted by drew at 08:00

As you say, there's nowt wrong with Eugene's approach, but Lanegan's version is the one.