You Can't Take It 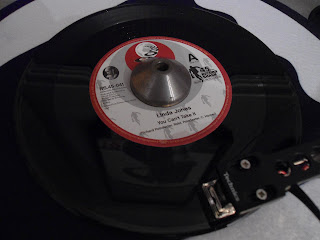 Back to work for me today after a better week in Machrihanish than was expected. We had sunshine on four out of the seven days away, the boys got to body board in some excellent waves off of Westport beach and I got to get my kite up which was great although my arms were aching afterwards.

Linda Jones has featured on the blog before with her very distinctive  gospel influenced voice. Today's track was originally from 1967 and was only ever released in France on the Warner Brothers label for some unfathomable reason. It is an uptempo screamer of a track wich Jones giving a very powerful almost belligerent vocal full of disdain for a previous lover. Great stuff. It was re-released on 7" vinyl last year on the Austrian Record Shack label.

Blimey, Linda doesn't hold back does she? Terrific.

Man Alive Drew, "It is an uptempo screamer", you're not wrong there.

Linda Jones had a terrific voice. Complete tragedy that she died so young.