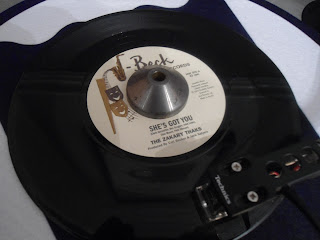 Another slice of 1966 Garage rock for you today, although this track was not unearthed and released until a few years ago. The Zakary Thaks are well known in the world of garage and psych with seven singles to their name, no one no hit wonders, these guys. Most of their singles were released on the J Beck Records, a local label from Corpus Christi, Texas from where the band hailed. They were active from 1966 to 1969 and are probably best known for the single Bad Girl which I was going to post but I think that this is even better.

I don't know how you do it, Drew, but keep doin' it. Something so familiar about this one, but I'm sure I haven't heard it before. Just heard your offering from yesterday too. What a beaut!

Quality, son! I only ever heard 'Bad Girl' on a Pebbles comp. Truly a deep track, this one.