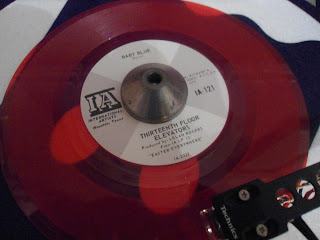 CC over at Charity Chic Music has an excellent ongoing series pitting originals by Nobel Laureate Bob Dylan with the upstarts who think that they can cover the great man and frequently have the audacity to do a better job than him. At present of the fourteen tracks Dylan has came out on top 8 times. I have been wanting to post today's cover of a Dylan track for ages and didn't think that CC would be featuring it but asked him to be sure.

There is something really sad about the 13th Floor Elevators cover of It's All Over Now Baby Blue. The song originally featured on the 1965 release Bring It All Back home and has been covered by hunners of people, Them's version being a particularly good interpretation but for me the Elevators version just can't be beaten. When I listen to it it feels like a requiem to the hippy counter culture of the 60s even although it was written and released during the summer of love, even the guitars seem to be weeping. I think that the Elevators may have had a premonition when tripping on LSD but then again I am probably just talking through my arse, The song was on the band's second and best album Easter Everywhere and was also the flip side of their third single, She Lives (In A Time Of Her Own).

It has been said that the 13th Floor Elevators cover  is Dylan's favourite rendition of the song. I think that many of you will disagree but I think it's magic.

I'll have to give that a listen later on. The original is probably my favourite Dylan song so I'm a bit wary of covers. The Them version annoys me now, because I keep wanting to listen to Beck...

I agree with the sentiments of your second paragraph (apart from the talking out of your arse bit!). I'd still probably go for Bob's version in a head to head though, just.