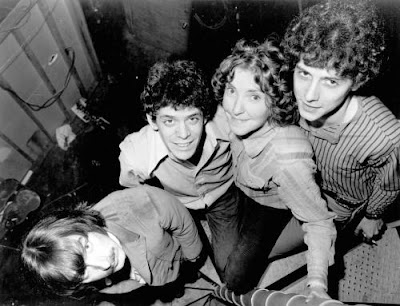 Here is probably my favourite Velvet Underground track. I'm not sure why, I love the lazy almost plodding tempo of the track it sort of gets under my skin. Lou Reed later re-recorded the track along with a few other Velvets songs for his first solo album but that version loses all the subtlety and  is vastly inferior to this one.

I have a feeling that Michael and  Margo Timmings had listened to this track a few times before they covered Sweet Jane on The Trinity Sessions.

The Velvet Underground - Lisa Says
Posted by drew at 10:27

Email ThisBlogThis!Share to TwitterShare to FacebookShare to Pinterest
Labels: The Velvet Underground

Sometimes I think I only need The Velvets.

I know how you feel Mr H but you would also need The Fall, surely?

Loaded and the one with Pale Blue Eyes are my fave albums - but this is perhaps my favourite track - Guess I'm Falling in Love (Instrumental Version) I heard it in Virgin, spring 86 and it stopped me on the spot.

PS recording a new podcast tonight, and I'm chipping a Fall cover in

I'm also chipping in The Wolfmen doing a Velvets cover..

There's something about the 2 post John Cale albums which is very special. Lou Reed's solo career though- what a mess. He's made a little go a very long way

ah lou with your flip up glasses business. who'd've thought