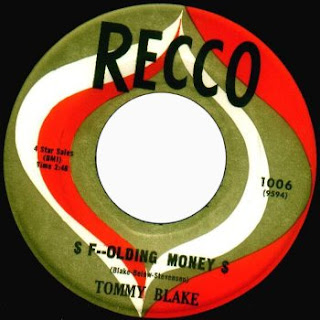 Those of you of the same disposition as Ctel, in that you can't fucking stand Mark E Smith and The Fall should mibbe be better giving this blog a body swerve for the next few Saturdays or until I get bored and get an original idea and go with that but until that happens you're stuck with this.

I think that I may have mentioned a couple of times of the high esteem that I hold The Fall in and have posted one or two of their tracks over the two and a bit years that this blog has been going. Over there 34 year history the gruppe have had a penchant for including cover versions on their albums and live. No genre is safe from getting the Fall treatment, everything from rock, Deep Purple's Black Night, through disco and encompassing William Blake poems later sung as hymns and all transformed to be instantly recognisable as Fall songs.

I think we will start with one of Max's favourite songs.

$Foldin - Money was originally recorded by Tommy Blake, a man who could have been a forerunner of Smith's, described as a "headlong troublemaker" by one contemporary and another said of him "Some guys can give it a shot, accept that the public doesn't want to buy what they have to sell, then move on, happy that they at least tried. Not Tommy Blake. That could have been written about Smith. The Song was released as a single in the States in 1959. He had a chequered career, passing through quite a few different labels in the late 50s and 60s. He succumbed to the twin vices of alcohol and drugs and on Christmas Eve 1985 he was shot dead by his third wife.

The Fall recorded their version in 1999, it was included on that year's Marshall Suite album and was also released as a single.

Email ThisBlogThis!Share to TwitterShare to FacebookShare to Pinterest
Labels: The Fall, Tommy Blake

I think Ctel has disabled the Fall link.

SA and Ctel you will be glad to know that the Fall link has been sorted.