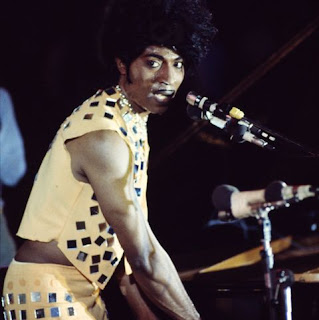 2020 is beginning to feel like 2016 on steroids with the amount of deaths in the music business.

I first really became aware of Little Richard when I was twelve or thirteen. At the time I had become quite obsessed with Jimi Hendrix and had taped a documentary that had been aired on BBC2 which I kept returning to. There were a few scenes that stay with me from that documentary, the black and white footage of Hendrix doing a live version of Johnny B Goode, the Monterey Pop footage and the shall we say flamboyant appearance of Richard Wayne Penniman pronouncing "he was a star, when I got him he was a star" at the time I found it hard to get my head around Hendrix playing guitar a for one of the inventors of rock and roll, the music just seemed so different.

Over the years I have learned to appreciate the justfied self proclaimed "Innovator, Originator, Architect of Rock n Roll" (for some reason a lot of folk seemed to be reluctant to acknowledge his contribution) from A Girl Can't Help It, one of the most essential rock n roll songs, especially the slowed down studio re-recording which adds to the sexuality of the track through to the more R&B, Soul recordings for Okeh from the mid 60s but that's about where I stop. His influence can be seen all through music from James Brown and the JBs through the Heavy Metal of the late 70s and early 80s . Bon Scott and the Young Brothers being big fans and I am sure that Freddie Mercury watched quite a few Little Richard performances and made notes and do we even have to mention the sadly departed Prince Rogers Nelson.

Little Richard - Get Down With It
Posted by drew at 11:04