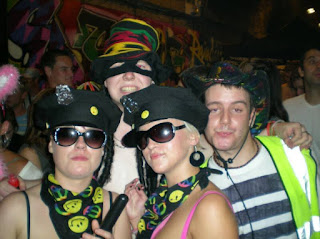 A bit of Portuguese tech-house remixed by French Duo Discodeine  and released on their label,  Dark & Lovely, proper European partnership going on here. I know nothing about this but bought it when I was going through my obsession with all things Pilooski and Dark & Lovely. It throbs away in a good way not like when you rattle your thumb with a hammer.

Last week's Scottish Cup game was not the slaughtering that had been expected, indeed just before half time the Celtic keeper pulled off not one but four excellent saves in rapid succession denying the Diamonds of a goal. Second half was a bit backs to the wall stuff but we came away with a three nil defeat, not as bad as a couple of encounters Motherwell have had recently with Celtic, as I overheard  Leo telling his mates over the PS4 when I take it he was getting a pure slagging at the result.  From the radio commentary and the highlights on telly last Saturday night (it's been a long time since the Diamonds have been on Sportscene) the team played exceptionally well, especially the defence and midfield as was essential and the keeper, well let's just say he's a keeper in the other sense of the word, no matter what the horrors on social media say about him and Airdrie in general.

Tomorrow it's back to league action away to Stenhousemuir. Although Stenhousemuir are sitting bottom of the table, that doesn't really go for much in this league and I expect that it will be a tough game. I am trying to persuade Leo to go with me tomorrow but he's not into it at the moment, we shall see.

A respectable showing in Parkhead followed by a match against a last-place team in their own league. Feels like a bit of a trap game, doesn't it? Best of luck to the lads. I hope they can keep the momentum going.