You Live And Learn 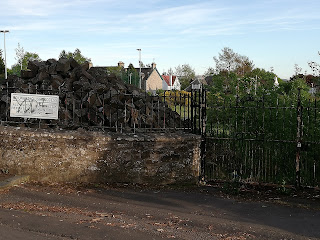 Twitter is not all racist bile and watching Trump's decline into madness. Sometimes it is quite informative. A few months ago I was discussing early 90s progressive house 12" singles with @ropoem (Robert Hodgens aka Bobby Bluebell) when I tweeted a picture of Fallen by Dove, the original one on SOMA before they had to change their name to One Dove. Ropoem tweeted back "I played guitar on that"I thought he was on the wind-up and tweeted back "Seriously?" It turned out it was true and for a short period of time Bobby Bluebell had been part of Dove/One Dove before "they sacked me".  To be honest I wasn't that surprised as Bobby had a residency during the early 90s djing "Bob's Full House" at the Volcano (club featured in Trainspotting) in Glasgow playing that kind of stuff.

Everyday is a school day, as they say and yesterday Bobby tweeted an absolutely beautiful song  entitled Ballad of a Bitter End in memory of his best friend Bobby Paterson, one time member of Love and Money, early producer of Primal Scream and finally member of the Poems along side Mr Hodgens. I had never heard of this band so checked them out on Discogs and they appeared to have released one album and one single. I decided to investigate further, as you do and headed over to Youtube where I found the video below which totally blew me away, what a tune. So I was back on Twitter asking Bobby if this had had a physical release as it did not appear on Discogs as part of the album listed or on the single. Sadly not was the response and was further informed that it was a Bluebells song that was never released by that band either. So I had to purchase  the track from iTunes along with a rather good cover of the Arthur Alexander penned classic You Better Move On. I was also promptly back on Discogs purchasing a copy of the Young America cd.

In a further twist it appears that I already owned something by the band as when I played the two downloaded tracks in iTunes another track by the Poems was listed, a cover of 10:15 Saturday Night from the American Laundromat Just Like Heaven (A Tribute To The Cure) album.

I like that. The guitar is quite punchy and muscular.

The kind of thing that the internet was surely invented for

Now that was interesting. I was into several bands on Minty Fresh (Chicago label) around this time but somehow missed the Poems. I just found a used copy of the Young America album for only a few bucks. If I have done my homework well, the vocalist on the video above is the daughter of Mike Ogletree. He was the drummer for Fiction Factory and played on a couple of songs for Simple Minds on New Gold Dream... Numerous Scottish connections with this band.

I knew this would be of interest to you Brian, my first thought actually, afterI really like this was "I wonder if Brian knows about this mob?"

I was thinking the same thing Drew.

I've also got the Cure cover, courtesy of a reader passing on the file to me, but had no idea at all about the back story. Genuinely fascinating....(I'll even forgive your shameless bit of namedropping!!)