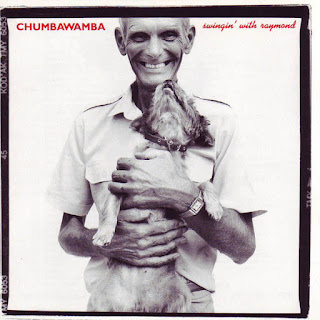 I kind of lost track of Chumbawamba for a while after Slap and was kind of dumbstruck when I heard their name being uttered on mainstream radio in 1997 when Tubthumping was all over the airwaves. I did like the track but then I would compare it to things like Unilever and Revolution and the word sell-outs was not far from the front of my mind that was even before I found out that they were now on EMI! When I went back and listened to a couple of the albums that they had released prior to Tubthumping I was left speechless, especially Swinging with Raymond released in 1995, there was always harmonies and poppier bits to the Leeds anarcho-punks but a whole album's worth. My mind was totally blown.
The album consists of two distinct halves, "Love" and Hate". The Love side being more acoustic with all tracks sung by Lou Watts and Hate being faster, noisier but not as furious as previous Chumbas material. Over all the contrast of the sides works well and although you can tell that this is product of the mid 90s it has dated quite well in my opinion.
Chumbawamba - This Girl
Posted by drew at 10:56