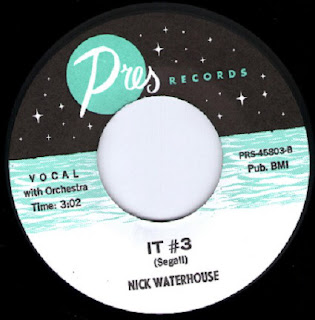 One of the best gigs I have ever gone to was also sadly, possibly the most sparsely attended too. When Nick Waterhouse came to Glasgow in August 2014 it was disappointing to see King Tut's less than half full but those who were in attendance had a great hour and a quarter with plenty of room to groove to the retro R&B that Waterhouse and his ultra tight band produce. Unfortunately there has never been a repeat of the night and as far as I am aware he has been over to the UK twice since then but never further north than Manchester and you can't really blame him. It #3, is a cover version of a Ty Segall song and  the flip side of This Is Game which although I already had a copy on Innovate, I purchased one of the limited run on Nick's own label Pres Records at the gig.
Nick Waterhouse - It #3
Posted by drew at 11:03