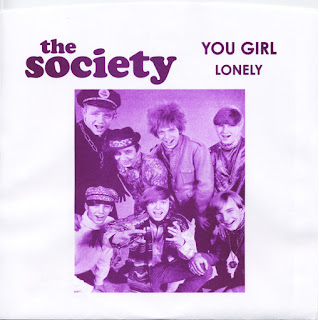 The Society were a bunch of mid to late teenagers who played covers at dances around Lakewood Ohio in 1966 and 1967. Two members of the group wrote a couple of songs which they intended to record in the hopes of landing a record deal and so in June 1967 the group went to Cleveland Recordings and cut the two tracks. The A-side You Girl was a "fuzzed out blaster" and the much more brooding and moody Lonely on the flip. For some inexplicable reason there were no takers for these two excellent garage tracks which subsequently languished in the vaults until they were unearthed and released as a 7" single on B-W records last September.
The Society - Lonely
Posted by drew at 12:38

If I had been an A&R man and heard this, there is no way I would have passed it up.