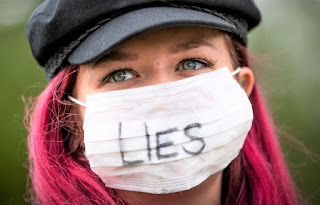 I didn't have the inclination yesterday to think about anything for the blog after watching that pathetic excuse of a man that now has the job he has dreamed about his entire life but has found out that he is extremely shit at it,  lie to the nation on TV and spent the rest of the day seething and spotting the ISS and the support vehicles. I missed the shooting star but did catch one last week. The night sky when able to be seen is a joy at the moment what with the ISS passes, Mercury and Venus being visible and the sliver of a crescent moon last night was lovely but I digress.

My rage had abated a bit earlier until I found out that Bawjaws unelected SPAD  who is actually running the UK has decided to address the nation later on today. So it looks like we have now become a lot less than a democracy and are really no better than Russia, Brazil and Venezuela which is ironic as we were told that that is what we would have become with Corbyn in charge. Lucky escape that was, eh?

This clip of Jah Wobble's Invaders of the Heart live on KEXP temporarily brought the blood pressure back down.

Good JW clip. The night sky is a source of joy at the moment- simple pleasures eh?

Not tonight, too much cloud cover here but I have been told that there was a U2 spyplane spotted over the home counties and a Russian Antanov tracked over Fife tonight