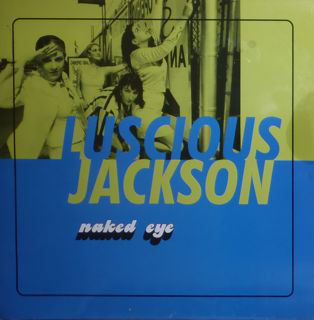 A couple of posts by other blogger's yesterday is responsible for today's track. First up was SA's over at the Bagging Area where he had posted a belter of a track (aren't they all) by Beastie Boys which got me thinking about Luscious Jackson and then I headed over to the Swede's bit where he had an excellent bit of Scandi Kosmiche called Propeller Propulsion by Swedish four piece Automatism. So after I turned off the lap top I rooted around in the Indie/Hip/Hop/Baggy 12" single cupboard for the Propellerheads heads remix of Naked Eye by the first signing to the Beasties Grand Royal label.

If the truth be told I was rather underwhelmed after playing it, it's alright don't get me wrong but just not as good as I remember it being. That could have something to do with the intervening 23 years, fuck, TWENTY FUCKING THREE years! Unless my memory is totally screwed I did always prefer the British Big Beat duo's remix but now the original mix is the one that's doing it for me. Tastes change I suppose.

Tomorrow I'm going to give Fever In Fever Out, the album Naked Eye comes from a spin. It the present time I have no recollection of any of the other tracks from it! Old age does not come itself.

I remember enjoying their first three albums at the time, but, like you, right now I'm a bit foggy as to what they actually sound like. I believe that they're all still downstairs on the shelves (although I could be wrong), so I might catch up with one of 'em myself later on.

I should do some LJ catch up too.

I do hope that your pressing of 'Fever' isn't as crap as mine, Drew ... one of the worst pressing in (the poor rests of) my collection ...

I can top that, Dirk. I own the worst copy of this single...