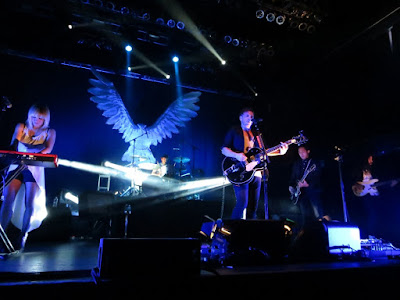 I have seen this lot a wheen of times over the last eleven years and only once have they been anything less than excellent live but that gig was at the Arches where the sound for bands at least was always a bit hit or miss and the crowd that night didn't seem to be particularly into it. Not sure if they are still active as a band, there hasn't been anything from them since, for me anyway the extremely disappointing Dope Machines in 2015. The first time I saw them was in November way back in 2008 when they were supporting Frightened Rabbit in the Wah Wah Hut. I didn't expect that much but if the headliners had been anybody other than the Frabbits they would have blown them away with their short set, what made it even more amazing was that that had been their thirtieth gig in 31 days! Not sure if Innocence was played that night, I think it was but it was at the following gig at King Tuts that ended with the band in the crowd and the crowd dancing on the stage, including one Prof Clark or Comrade Colin as he's known to many bloggers. It is a firm highlight of the live set and therefore a live version seems appropriate.

Aside from their memorable moniker, I know next to nothing about these guys. This tune is bloody great though.

Kind of forgotten about this lot, but as you say, they were really enjoyable back in the day. The Comrade was huge into them....Sometime Around Midnight was his theme song for a bit when he was having a tough time of it emotionally.