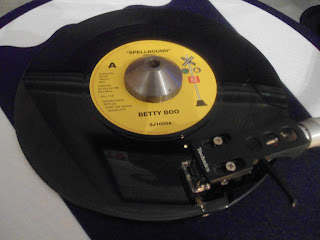 Not the same song as the Azie Mortimer one that has featured here on more than one occasion at Halloween on this blog, Tamiko Jones* release from 1966 on the same label, which surprisingly hasn't featured here. Spellbound was originally supposed to be released on Ed Wingate's Golden World label but was shelved when Berry Gordy bought the label and only saw the light of day. until recently  as an album track on the first Grapevine compilation album, Talk of The Grapevine in 1978. Betty Boo's real name is Betty Winston who along with her sister Jackie and Pat and Diane Lewis recorded three singles as the Adorables for Wingate's label.

* Kindly pointed out by John in the comments, it was late last night when I threw this together.
Posted by drew at 08:00

Of course you are right John, I was thinking of Haunted for some reason. Thanks for pointing it out.

Haunted/Spellbound - easy mistake to make with Halloween in the brain but did have me searching for a while for a 'lost' Azie track.