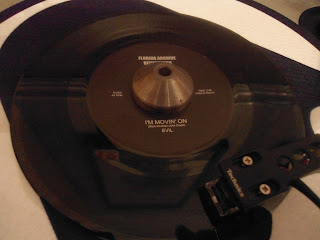 Today's slice of garage rock again comes from that vintage year of 1966. Not strictly true as I'm Movin' On was never released and languished on acetate for years eventually being unearthed by a garage music historian Miami Jeff who released it on his own Florida Archive Recordings/Limestone Records.

Evil hailed from the Miami area and were active from 1965 to 1967. In 1966 the won a local Battle of the Bands competition and their prize was some studio time where they recorded I'm Movin' On and a few other songs, which were cut onto an acetate and then forgotten about. The band did release one single, a cover of the Small Faces Whatcha Gonna Do which was released in 1967 on another local label which came to the attention of Capitol Records who signed them up and re-released the single and the group duly imploded before they released anything else.

Miami Jeff deserves some sort of award for unearthing this absolute stormer of a track where the influence of the Who and The Small Faces looms large. No bad thing in my book.

Blimey, this is a bit special. Cheers Drew.

This could quite easily appear on a Wild Billy Childish album. Two good tunes to start the week, Drew. Our dogs, though, are appreciative.

You spoil us with the sounds of '66. Special year.