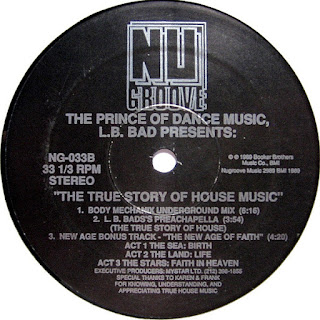 Still finding it hard to focus after yesterday's result. If the UK decision to leave the European Union made me nervous, the realisation of Trump in the White House in a few months for at least four years fills me with dread.

So to the music. Here is a track that will sound familiar to all of the Weatherall acolytes out there. I'm sure that most will be aware that New Age of Faith predates one of Lord Sabre's masterpieces by four years.  Tucked away at the end of side two of a 12" sing;e after a myriad of mixes of The True Story of House Music. For years I have struggled with whether this was a blatant rip-off or an example of making a silk purse, not out of a pigs ear as such but out of a piece of  discarded, unremarkable cloth. I tend to think that although the bare bones of the track is there it takes the Weatherall magic to transform it into a thing of beauty.

A much less important factor but an interesting one nonetheless is the commentary on news blogs here in Ireland (and I assume in UK /EU) with splurgy161 et all chiming in that it's great news and that its obvious why Trump got elected. These cretins position themselves as opinion makes while sharing their inane drivel with similar locked in morons who presumably spend the evening wanking themselves blind after they have shared their genius with the rest of them.

Its incredible that anyone who has any measure of basic history, politics or common sense could even this is right.

Sorry, I needed to get this off my chest

well, I never knew about that track. thanks