And scattered stardust trails between the blocks 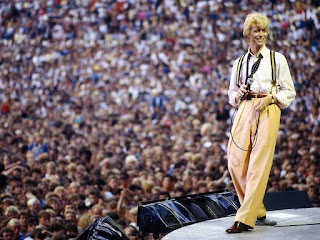 I have to confess that last week I wasn't that enthused at the prospect of what nobody realised would be Bowie's last album. In fact apart from the Love Is Lost single I hadn't taken much of an interest in Bowie since he released what is my favourite song by him Absolute Beginners. But today I was genuinely shocked and saddened by the death of arguably the most influential person in rock and pop. It got me thinking of just how much Bowie music I did have and of how I had just taken for granted, Stuff like Young Americans, The Bewlay Brothers, Five Years and dozens if not hundreds of others. They were so familiar, always there in the background but never regarded by me in the same way as Spector's productions or London Calling or other music I consider to be essential,  most of which, apart from the stuff that came before him obviously, was most probably influenced by him either knowingly or not, You don't know what you've got 'til it's gone, ain't that the truth.

I saw Bowie at the Wembley Arena on the Serious Moonlight tour with my pal Ben his sister and their father and it was one of the best gigs I have ever seen, one which went on for ages without a duff song, At the time I loved the big baggy suit, the over the top stage set the sheer effortless coolness of the whole performance, the only disappointment for me was the lack of Stevie Ray Vaughan in the band as I was really looking forward to hearing his guitar playing. Funnily enough I never had any feeling of need to see him again live on subsequent tours which I am now glad of as I'm not sure that he could have bettered the performance I saw,

We will not see his likes again, something I typed not so long ago with Lemmy's passing which is even more true today. But I am getting a bit tired of thinking it.

Never saw him play live. Will always regret it.

Having trouble functioning at the moment to be honest.

A biggie for me. This is one I can't write about... at least not right now. I only saw him once, on the Sound and Vision Tour in the summer of '90. I couldn't really afford to go, but I made sacrifices and went anyway. Obviously, I'm glad I did it. I would take the Serious Moonlight tour at Wembley in a heartbeat.

"The Stars look very different today..." indeed...
Music starts with David Bowie for me. Sure, I knew of other acts as a pre-teen in early 1970's, but David Bowie was the first Rock Star for me. He helped to show me my musical direction as a fan and informed every single road I followed down music's highways and byways. None of the music I hold near and dear, even the Punk Rock has David Bowie's finger print on it. He understood that things were changing after The Beatles called it a day and the 60's were over. The thing Bowie understood the most was the young audience of music fans and their undeniable need for change, for things new and different and he was prepared to offer all that and more.
I fell right in with what Bowie had to offer. He wasn't an Alien, but what he offered was. It intrigued me, it caught me and held me tight. My first rock concert, thanks to an older cousin of massively good musical taste, was The Year of the Diamond Dogs Tour and it's something I will never forget. But as luck would have it , this then 11 year old got the opportunity, courtesy of that same amazing relation, to see Bowie again that year when Diamond Dogs morphed into The Soul Tour in and came through NYC again. I realized, even as a kid that David Bowie was more than something special, he was ONE OF A KIND.
I would go on to see Bowie again as The Thin White Duke in 1978 by which time Low and Heroes were,absolutely, my favorite albums of all time - they are still pretty hight up there. Then again on the Serious Moonlight Tour when I was excited, but concerned about what it was he was touring. The concert wiped away all my trepidations for a Bowie that was now a commercial artist as well as icon.
Seeing Bowie on The Glass Spider Tour is better left as a momentary lapse - Bowie going through the motions, which is what happened to his work in the 80's after the Mega Success of Let's Dance. The
Sound + Vision and Outside Tours were the last two times I would get to see Bowie and he was still White Hot and he had found a renewed vigor live.
As a well worn adult I can look back at all my Popular Music experiences and see that David Bowie informed all of it.

Absolute Beginners is my number 1 Bowie too, which is weird really considering where it's from. But it soars like a bastard, and it actually captures the feel of the book in a way the film doesn't even come close to. If you were to ask about his albums then I'd be talking Pin Ups, the Berlin things, the Deram album. But weirdly, in the middle of what everyone says is his worse period he threw that song out there. I stood in a storeroom yesterday having a moment to that song.

That is exactly how I feel about it Simon, so so good and it has to be the full 12" version.

Dear Drew - I went to the same David Bowie concert as you did at the Wembley Arena on the Serious Moonlight Tour in June 1983. It was seriously fantastic. I was then the ticket manager for Harvey Goldsmith Entertainments who were promoting the concert. I got myself front row tickets which were so close that I could see unknown white powders falling out of his nose. Brilliant show.

Sir - I am a regular visitor to your site. I love your music. Thanks for your insights and generosity of spirit all the way in Scotland: from Johnnie K in Auckland New Zealand

Thanks Johnnie K. My pal's dad was friends with Harvey Goldsmith that is how we got tickets for this, Bob Dylan and Roger Waters on the Pros and Cons tour