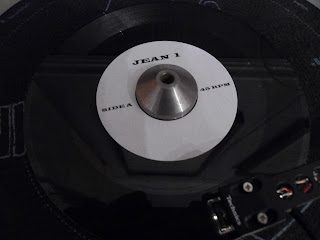 In 2011 an album was released by three musicians which was quite novel. They took vocal tracks from obscure songs by Brian Wilson, John Lennon and John Martyn amongst others and re-imagined them. What the guys did was put the vocal tracks to music that they thought suited it best which sometimes meant that the tracks were completely in the style of the artist in the period when the vocal was laid down or on others to the sounds that they imagined suited the vocal style best and therefore the Billy McKenzie track comes out all Memphis '66. The album for me is a mixed bag with one track that is head and shoulders above the rest where the lead vocal by Jean Terrell of a 1972 Supremes song from Dan Penn , Jimmy Webb ( correction thanks to Artog) called 5:30 Plane is given the northern soul treatment and turned into what I think would have been huge on the scene. I was of the belief that this track needed to be pressed as a 7" and emailed the guys to tell them so. I was so convinced that I put a proposition to them that I would put up the money for 500 copies to be pressed up and once they were all sold, which I was sure would be a peace of pish all I wanted was my money back and 10 copies of the single. I had some money from the sale of some shares, the money eventually went on the hugely more exciting project of re-pointing the back end of the house. Sadly they declined citing the heat and attention they had received since releasing the album. So that was that then.

Not quite, a couple of years ago while scouring the northern singles on ebay. I saw an  auction for a 7" of your own choice, All you needed to do was pay the money send the two tracks you wanted on the 7" and in a couple of days you would receive your record. I decided to try it out and ordered the single with two extremely hard to find northern songs, Indian Giver by the Chantelles and In The Same Old Way by Scottie Williams. In under a week the single arrived and I nervously put it on the turntable expecting the quality to be rubbish but it wasn't, it was perfectly adequate for a boot. So I immediately put in another order and there was no question what one of the songs would be, it had to be Jean 1. The other side was a lot trickier, there were loads of northern tracks that could go on it but I eventually picked Harder Than You Think by Public Enemy which up until that point had only been released on vinyl as a 12" single I had only ever seen for sale once with a price tag of ninety quid, it was subsequently released on RSD 2013 as a secret single which is even rarer. I decided after this single not to order any more as it could have become a costly business at £20 a pop.

and here is the original. Compare and contrast

ooh. I had a copy of this album. Not quite sure where it came from. Not sure I listened to it properly. Must check if it's still somewhere on one of my back ups.

This is the real problem for me with MP3s. I have way too much music. And because it's out of sight on drives or discs around the house as 'files' I don't listen to any of it. If I'm not listening to it, should I be keeping it for a rainy day.

I remember this from the first time you posted it. Love it.
Swiss Adam

I prefer Jean 1, but not long after you originally posted it I settled for a copy of the Jimmy Webb album.

You are right Artog. Jimmy Webb wrote it not Dan Penn.

I confess I didn't know Jimmy Webb actually wrote it, I just meant The Supremes album produced and arranged by Jimmy Webb. But, yes, turns out he did write it.

Your fandom knows no bounds! I agree with you about that record-making business being dangerous. I don't want to choose between these two takes. Both are wonderful.

Yup, a quick google shows me you posted this way back when. I must have nabbed a copy then.