It's Just Our Way 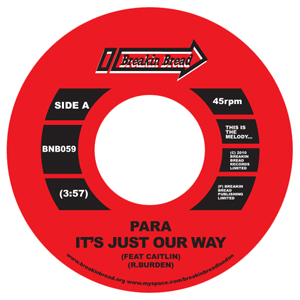 I came across this record on the Fat City website the other week and after listening to the first 30 seconds decided it had to be purchased.

Para has been described as the South West's answer to Cut Chemist. He started off djing and producing Hip Hop mixtapes. He joined the Breakin Bread stable in 2007 where he has released a series of 7" singles and a brilliantly named mix cd called "Smack My Pitch Up".

It's Just Our Way features the vocals of long time collaborator Caitlin and is a refreshing piece of modern funk with an infectious breakbeat in the back ground. I think that this may be right up Simon and Mondo's street.

I will be exploring the other offerings from Breakin Bread and you can too here.

Email ThisBlogThis!Share to TwitterShare to FacebookShare to Pinterest
Labels: Para.

Bullseye - you've got me correctly pegged Drew, that is so up my street it's blocking the road. It's got a ton of remix potential too.