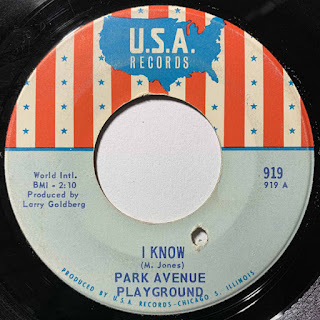 The Trip isn't a cover of my favourite Kim Fowley track which has been featured here in the past but the flip side of the only single, "I Know", the only release by Park Avenue Playground, a bunch of kids at the time hailing from Lansing, Illinois  The track was recorded in an old theatre and is a furiously paced fuzz guitar, mad sound effects and lyrics suggesting that this bunch had taken a trip or two. The band had 500 copies of the single pressed in 1969 for distribution and the single came to the attention of the Chicago label USA Records who unsuccessfully tried to sign the band who disappeared without trace after that.