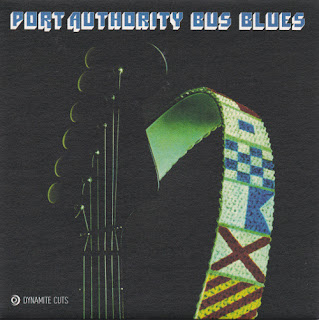 Paul Simerman, a senior musician in the US Navy had a novel idea for recruiting young men to the Navy at the beginning of the 70s, form a band, record and put out music as Port Authority highlighting that their were other careers in the Navy other than Able Seaman or Deck Hand. The project must have been deemed at least a partial success as the band existed for 14 years and released 5 albums.

Port Authority Bus Blues was the final track on the band's debut album released in 1975, a funky, jazzy workout that would not have been out of place as the Theme to some hard nosed detective show or the main theme of a Blaxploitation film from the period. It was finally released earlier this year as a 7" single which I had on pre-order for quite a while.

This is great. That guitar is so dirty!