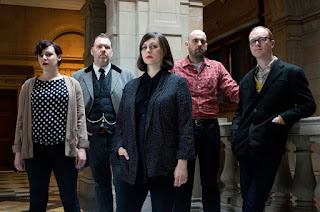 Another very good proponent of the well chosen cover version are Camera Obscura who are great at taking well known upbeat pop songs and giving them a Glasgow twist, ie making them thoroughly glorious but fucking miserable, check out the covers of Super Trooper, Some Guys Have All The Luck and Modern Girl for examples of this art. However I want to post a particularly despondent version of an already downbeat song.

Tougher Than The Rest was originally recorded by Bruce Springsteen on 1987's Tunnel of Love album and album that doesn't get that much of an airing in this house as regularly as other bits of Springsteen's output, not sure why that is but  Tracyanne and her crew's version was released on the b-side of 2009's single Sweetest Thing.

Covers don't get much better than this in my book.

Camera Obscura - Tougher Than The Rest
Posted by drew at 08:58

Quite like the Everything But The Girl version as well

What CC said. Plus, check out the version by The Mendoza Line.

Tunnel Of Love has a special place in my heart as it's the first Springsteen album I bought when it came out. This followed a year or so in which I'd gorged myself on his back catalogue and was desperate for whatever came next. A divorce album probably wasn't exactly what I was looking for at 15, but I still wore the grooves out on it.

If pressed to choose my favourite Springsteen album, I always find myself torn between this, Nebraska and Born To Run... though I accept the other two are far more popular with the rest of the world.

Ooh... I don't have this single. Thanks for the flip side. Really good.

I have the Mendoza Line version on the 30 Year Low double cd.

Not heard the EBTG version CC

A Camera Obscura single you don't have Brian, tut tut