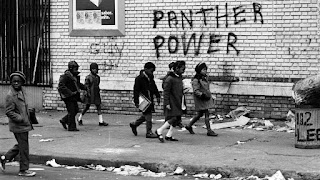 Even in the days when I really didn't like Elvis and conformed to the insane view that he was a joke, a stooge or even a simple, rascist as Chuck D believed I had a soft spot for In The Ghetto, I would never admit it to anyone, well not until I was nineteen and started not giving a fuck what others thought of the music I liked. I was in my late twenties before I heard Candi Staton's version of the Mac Davis penned tale of the short life of  an unnamed "young man" in the projects of Chicago, and it blew me away as I never thought that anybody would ever come close to Elvis's rendition, Certainly the versions I had heard up until that point by Nick Cave, Chris Clark, Beats International or The Blizzard King, one of Bill Drummond's made up Finnish artists on his post KLF Kalevala label couldn't lay a glove on what is the original but the version recorded at Muscle Shoals and released as single in 1972 is as near as it gets.

Candi Staton's version of "In The Ghetto" is my favourite. She also did great covers of the Bee Gees' "Nights On Broadway" and "Suspicious Minds"

Daughter has recently got into the Elvis version, a song I've always love too.

That is very good.

In The Ghetto is one of those songs that should be so cheesy you choke on it, particularly when sung by a reclusive millionaire and probably the most famous pop star on that planet at that moment in time... and yet, it just gets you in the back of the throat. Only thing that equals it for that is Love Child by Diana Ross & The Supremes.

Then again, I also regularly choke up at Don't Cry Daddy.

Listened to the Elvis version earlier this week. Candi Staton's just may be better.

Rol - Don't Cry Daddy has a similar effect upon me

I heard Candi singing In The Ghetto back in 72/73, I think on Johnnie Walker's lunchtime Radio 1 show. The memory plays tricks sometimes but I think that was the first time I had heard her. From that moment on I was completely hooked on her, and continue to be.