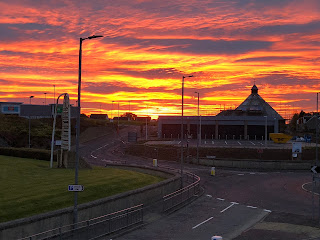 These long songs on a Monday are unearthing some gems across the sites, the Swede in particular has been putting me on to things that are totally new to me. When looking out things for here I have dusted down some tracks that haven't been played for ages or I had totally forgotten about and in some cases has sent me off on some weird and wonderful listening tangents.

Today's track fall into the "hasn't been played for ages" category. When I took a punt on "These Were The Earlies" back in 2004 I was kind of perplexed at first, didn't know what to make of it, it didn't sound like anything else around at the time, It was very trippy in an late 60s British folk/psychedelic way but with modern synths but with a bit of a US West Coast vibe about it too. One of the stand out tracks was Morning Wonder. A while ago I managed to pick up a single sided 12" promo of this track which extended the album cut to double it's length, all repetition and krauty sounding synths.

The Earlies - Morning Wonder (Final Mix)
Posted by drew at 08:00

This is bloody wonderful. I got seriously into The Earlies in the mid-90s thanks to Marc Riley constantly playing them on his 6Music show at the time. I was lucky enough to see them before they went their separate ways, but I've never heard this mix of 'Morning Wonder'. Thanks so much for digging it out Drew.