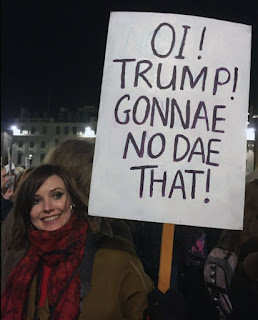 This track is a few minutes shorter than my usual song in this series but it come on over the weekend and I listened to it three times on the bounce and thought that it was quite apt this week.

Now,  I'm not one for trying to tell people from other countries how to vote, I lost a lot of credibility for David Bowie prior to the Scottish Independent Referendum when he deemed to put his neb in and a few others for that matter but folks in the USA could do worse than listen to Bruce Springsteen this week, that's all I'm saying.

Land of Hope and Dreams was written by Springsteen in 1998 was performed live on the following year's E Street Band reunion and then recorded during the sessions for 2002's The Rising but not included it was subsequently rerecorded and released on Wrecking Ball in 2012, The studio version is ok, actually really good but does not pack the punch of the live one posted here, from the Live In New York City album. Most Springsteen songs when you think of it come into there own in the live environment. I really should have paid the money a couple of years ago and gone and seen him at Hampden!

Bruce Springsteen - Land of Hope and Dreams
Posted by drew at 08:00

Great choice Drew. I hope he pulls the E-Street Band back together when his Broadway stint ends.