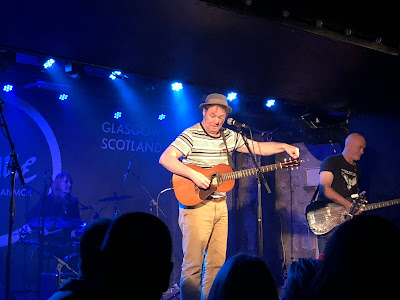 On Saturday night I had the great pleasure of seeing Martin Stephenson perform Gladsome, Humour and Blue in its entirety at Oran Mor. This album is probably my favourite by this much underrated artist and sound tracked my year in Aberdeen just as much as the Betty Blue soundtrack, 1000 Years of Trouble and various House 12" singles. In fact Nancy was played at least once a day for about a month.

I have never seen anybody so happy to be on stage as Stephenson and his between song banter was funny and at times informative about presenting the Dainties with one more dirge to record, when all they wanted was for Martin to come up with something a bit upbeat and poppy "like Roddy Frame". He also gave some insights into what it was like to be on the road with other bands, apparently the Bluebells were a great laugh but that Prefab Sprout were a miserable shower.

Gladsome, Humour and Blue has been re-recorded for it's thirtieth anniversary and can be purchased here. If you liked the original you will also love this re-interpretation and if you don't know the original you should buy this anyway as it is a lovely album, not the most upbeat of records but the music and lyrics are top class. The album was re-recorded at Beetroot Studios in Airdrie, a stone's throw from the football stadium and produced by Stuart MacLeod who joined the band on stage for an encore and who Stephenson tried to sell him a guitar. This recording session was not the first time that Stephenson had been to the town of my childhood, he has recorded at MacLeod's studio a few times and in 2004 released an album called Airdrie - Songs From The Industrial North which is pretty rare to get a hold of these days but is available for download at the Bandcamp page. Although today's track is on that album it did not get an airing on Saturday night but I can't grumble because the extras that we did get over and above the Daintees album were perfect for the time and place.

If you ever get the opportunity to see Martin Stephenson, don't hesitate as it is worth it just for the big stupid grin and the stories alone, the songs are a great bonus all the same.

Didn't realise that he was playing last weekend Drew, sounds like another top Martin Stephenson gig.

This is such a great read. All smiles over here as I'm realizing Martin is still doing his thing.

So sorry I couldn't make that gig.......you've nailed what it is that makes any Martin Stephenson show so very very special.