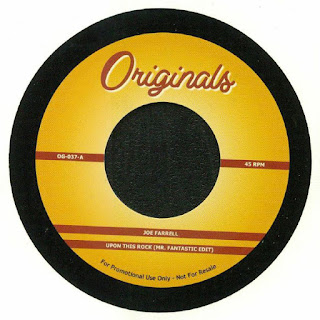 I've been a big fan of the Originals label ever since the first single, a Pilooski edit of a Dee Edwards song which was made all the more tasty due to having the original version on the other side which in its original 1971 pressing was well out of my price range,

Since then I have missed out on very few of the subsequent releases and those I have missed I have bitterly regretted. Sometimes I have never heard the track or edit before but there isn't one that once I have put on the turntable I have regretted buying.

I had never heard of Joe Farrell before I bought this single but I suspect that I had heard his sax and flute many a time as he was part of Chick Corea's group whom I have heard on many occasions as a friend of mine is a huge fan and probably owns all of the 130 albums listed on Discogs.  Upon This Rock was one of the four tracks on Farrell's 1974 album of the same name and clocked in at just under 10 minutes which would make it a contender for Monday's Long Song if that was the version I had, however the track has been wonderfully edited down by Mr Fantastic to a much more enjoyable 4 minutes, although I wouldn't have objected if it had gone on longer.  All the self indulgence and fat has been trimmed and what you are left with is a fine lean slab of funk, full of wah wah guitar, a beat that's not possible to ignore and a wicked sax which JC will absolutely hate.

It is a great song indeed. Thanks for that leap in time back to the 60's Drew. I think a good sax can refine a good song - even if JC will hate it. Maybe I start a small series of songs with sax in it. Btw - good to have you back on the blog.

Damn. Speaking of funk, Airdrie is in quite a rough patch.

Dreadful performance yesterday again Brian. Doesn't look like there is a game plan, schoolboy tactics at times. What is even more frustrating is that this is the strongest squad we have had in a few years, lots of potential but no spark. I don't like to call for the sacking of managers but I don't think Findlay is capable,