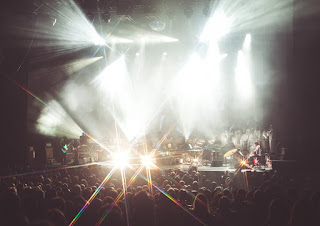 Since it's release last month, And Nothing Hurt, the 8th studio album from Jason Pierce's Spiritualized has not been far from the turntable, price of the box set aside the album is nothing short of brilliant, if this is to be the final Spiritualized album then it is a high point to bow out on. So for today's long song I thought that we would go back to an earlier  masterpiece from Spiritualized, Ladies and Gentlemen We Are Floating In Space and the ear splitting, nerve shredding finale, Cop Shoot Cop, the ultimate junkie's lament which recycles and repeats lines from John Prine's bleakest moment, Sam Stone. I have said "nerve shredding" because for ages that's what happened to me when the free jazz section kicks in, you have been taken in by the languid pace of the song and then bang you are confronted by a wall of white noise, it is especially effective live, when the lighting rig explodes and you have to concentrate on staring at the floor as if you look up your head would explode due to the strobes going mental.

Posted is a live version from New York in 2010.

Not a second wasted. Astonishing. Better I think than the Royal Albert Hall version that saw a release a while back.
Swc.