Nothing's As It Seems 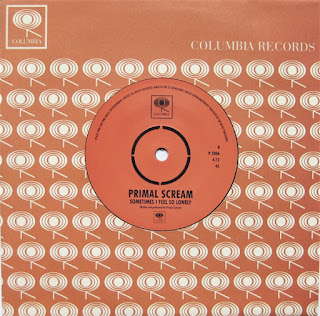 I was driving down the M74 on Sunday to Hamilton to do the shopping (life on the edge, eh?) when one of the few post Vanishing Point Primal Scream songs that I can say that I really love came on the Touch, Sometimes I Feel So Lonely the final track on 2006's Riot City Blues. I was only half listening as I was thinking about other things, primarily Sunday evenings chores including the ironing of school uniforms which I was not looking forward to one bit but I was dragged back to reality as something didn't sound quite right, the song sounded flatter, less full than I remembered and so when it finished, I clicked the back button and listened, really listened this time, where were the strings, that breakdown about half way through that always takes my breath away? Then I remembered I only ever play the 7" single version, haven't played the album since, well 2006 if I'm honest and of course only the album version is in iTunes as I wouldn't have ripped the single thinking that the album mix is the same as there is nothing on either format to suggest different version but they are and the 7" version is the better version by a country mile.

So the previous time when I posted this song I obviously posted the wrong version.

Am I the only person who is really excited at the prospect of the original mixes of Give Out But Don't Give Up dropping this Friday?

The reason I was worrying about school uniforms and doing the shopping myself is due to the fact that for the past 10 days L has been living it up in New Orleans, Memphis and Nashville with her best friend for in celebration of their 50th birthdays last year,  So the song was also pretty relevant too on Sunday.

Primal Scream - Sometimes I Feel So Lonely (single version)
Posted by drew at 08:00

'Vanishing Point' / 'Echo Dek' was my stepping off point for Primal Scream. A terrifically inspired period that they've never really touched in my opinion. Having said that, I'm pretty sure I'd not heard the single version of 'Sometimes I Feel So Lonely' before today - and it's excellent. Great vintage Columbia sleeve too.

Yep, this is the version.

Now, how about you making the trip across the pond? And yes, I will be at my local shop on Friday.

I haven't said this yet, but I thought I'd say it tonight... It's good to have you back.