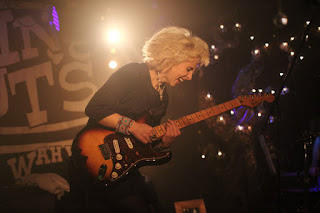 I'm not sure why I didn't keep up with the Joy Formidable after Wolf's Law which was released a while back now. It might be because that album didn't grab me like the previous two as at the moment I can't remember any of the tracks from that album. I will need to give it a listen in the near future.

While The Flies is one of my favourite tracks from the band's debut album, A Ballon Called Moaning which came out a decade ago now! On album the track sounds good but it reaslly comes into it's own in the live setting when it is usually extended to double it's length on record and hits you like the proverbial wall of sound. The version posted was recorded live at the Garage in London a comes to an abrupt end when the guitar amp blows up.

The Joy Formidable - While The Flies
Posted by drew at 08:00

I lost track of them after the Big Roar. Loved that album though. Is this photo from your personal collection?

No Brian, I never take photos at gigs and if I did they would not be that good, But it is from the Wah Wah Hut

Noticed where it was... that’s what had me asking. It is a rather good photo.