When The Night Falls 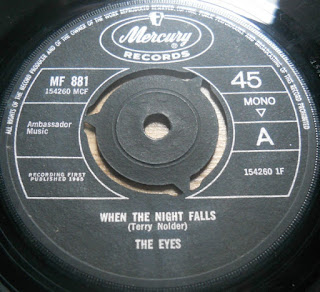 This rather groovy track is evidence that the Americans weren't the only ones that could produce classic garage/psych tunes during the mid 60s. The Eyes were a British outfit around from 1964 to early 67. When The Night Falls was the band's first single released in 1965 on the Mercury label and although it was released on a major label the record failed to grab the attention of the record buying public and so is a pretty rare piece of vinyl these days. The band went on to release a further four singles none of which fared any better. The band had a song called My Degeneration  and when I first heard When The Night Falls I thought that the sound owed more than a little to Pete Townsend.

When I saw the title of your post, I SO hoped it would be in reference to the Eyes! And yes, brilliant! I first heard them on the Perfumed Garden compilation (with 'You're Too Much') and simply couldn't believe my ears, that they were so unknown, and that I'd never heard of them before - so good.

Like C, I know these guys from a comp... the Nuggets II box set. Very good.

A rare instance of already being familiar with one of your selections. It's been a while since I've heard it though - what a great track.

I had a feeling that two of you three would have heard of them. I have toyed with buying the album that collects all the singles together but would rather just have this on original vinyl for me by far their best