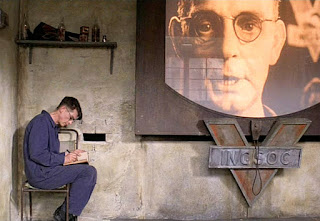 Apparently in these times of fake news and Donald J Trumpf, demand has outstripped supply of Orwell's classic, 1984 which gives me a reason to feature this track from Johnny Cooke's criminally overlooked band, Dog. The track is taken from the band's second album Tall Stories From Under The Table released in 2007 and ignored by almost everyone.

Thought we were going to get the Eurythmics for a minute there Drew!

I was half expecting Eurythmics too

I remember being able to get to a preview of the film as I was to review it for the Student Union newspaper. It remains one of the most surreal things ever - it was shown at 10am (in advance of the cinema opening for the day to the public) and to emerge blinking into bright sunlight after such a depressing watch was near impossible to get my head round.