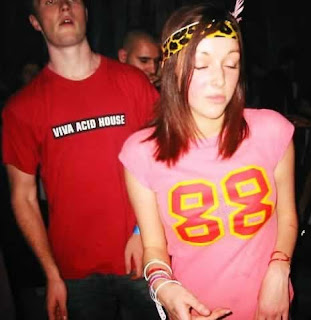 What with all of the Stone Roses stuff that has been happening this week I have been casting my mind back to the late 80's and to what was really going on, with me anyway.


I remember buying The Stone Roses a couple of months after it's release and liking it. It didn't blow me away or anything, no Damascene moment. At this time it wasn't Manchester bands so much that interested me but more producers such as A Guy Called Gerald and the others who had been showcased on the "North, Sound of The Dance Underground album. In fact around about this time I was getting the feeling that guitar bands were a thing of the past , slightly outdated and that House and Acid were the future.

I know that the two scenes weren't mutually exclusive and there would be a coming together of the genres in the years to come in what would horribly be termed as 'indie dance' but could be more appropriately be termed as 'indie shuffle'. But I do think that there were 2 distinct camps, the House heads and the guitar loving indie kids still not at one with the concept of 4/4 beats.

So when I think back to 1989, sure I played Fools Gold,  I Am Resurrection and  W.F.L by Happy Mondays but the track that sums up that summer for me from a Manchester band is Pacific 202 by 808 State.

have to agree. Stone Roses never did that much for me. She Bangs The Drums is nice but I slightly struggle to see it as a classic album.

Jesus, Drew: I have been looking forward to this post all night long and guess what?! Again no sturdy girl whatsoever but some stoned rickety scarecrow instead, and, even worse, backed by some loser who looks as if he suffers from visceral botulism: this is NOT fair, mate!!

I was sort of the other way round - loving The Stone Roses album, but also buying 808 State and quite liking them too. Especially this.

I think this week's picture is my favourite so far... Thanks for another top Friday tune!

Good tune. Think there was more crossover than you describe but maybe it depends on where you were etc. We need a late 80s Venn diagram.

i was hoping this wouldn't happen but heard she bags the drum to-day on radio and felt..well, something akin to a feck it, turn it off. something i never thought the roses would enduce. something wrong bout this. eni's Peter Hook carry on at the press conference did not help