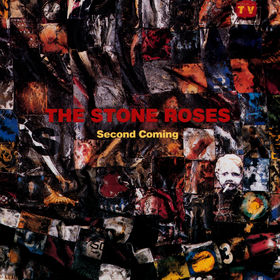 I have played this track quite a lot recently and for me it holds it's own against anything from their debut album or the non album single releases.

What really strikes me is the guitar playing there is a certain swagger or looseness about it that isn't quite as apparent on the earlier releases.  It reeks to me of somebody who not only thinks that they can play but has that arrogant belief that they are better than almost all of their peers. The self belief that the likes of  Jimmy Page or Ritchie Blackmore had/have and there in probably lies the reason why I like the track so much, it has to do with spending all that time in my youth with the pseudo hippies and soaking in all of those albums by Deep Purple, Led Zeppelin, Hendrix and the like which has made me a sucker for the sound of a wah wah peddle or a meandering self indulgent guitar solo.

One other thing, doesn't Ian Brown sound like he really can sing on this track,  what happened?

The Stone Roses - Breaking Into Heaven (Full version with wanky intro)
Posted by drew at 00:28

I never play this album, unlike the debut which I love, but every once in a while someone says 'Try this track though, it's really good'. It was the whole sprawling Led Zeppiness of the thing that seemed to put most people off at the time, as I recall.

PS: Wouldn't it be great if it actually said 'full version with wanky intro' on the album tracklisting?

Would it help if i said "listen to this track Davy, it sounds nothing like Led Zeppelin"?

One of the brighter moments from this album. Every inch of tape used for guitars. Cracking chorus. I like the wanky intro too. You're right about the swagger and self belief.

didn't say I didn't like the intro Sa but it is a bit, well wanky

It's been a while Drew, tbh. I'll give it another go. I have a Led Zep LP, incidentally.

I must confess to owning five, none of which is 4 Symbols.

Zep- I've got 1, 2, 3 and a comp. Don't particularly like any of them, but for the odd song. There's something about them I can't get past.

Bron Y-Aur Stomp from 3 is brilliant and Led Zeppelin is a very good album. I just have to blank out the vision of Robert Plant with shirt open to the navel.