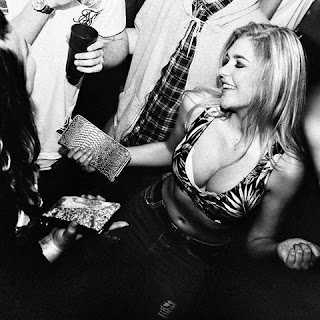 Over the past week or so I have been starting off my post work listening sessions with a mix cd out of the cupboard. The ones that I have got the most pleasure out of have been the ones that aren't squarely four to the floor dance but the more eclectic ones such as the Portishead and David Holmes groundbreaking Essential mixes but the ones that had me transfixed for their duration were the UNKLE ones. James Lavelle knew how to compile a mix did he not. He was also quite adept with the remix. Here is a remix of a DJ Shadow track featuring Roots Manuva from the 2002 released Mashin' On The Motorway double 12" released on where else but Mo Wax.

Stay safe and have a good weekend people.

Another photo that will have the Mrs. shaking her head as she passes by. Obviously, I will be too distracted to notice.

I see someone had a birthday this week. We had a similar low-key affair for our youngest on Sunday. Not fair! Anyway, a belated congratulations... old man.

One of those greats tracks that I have to leap to skip when it comes on the stereo, due to strong language.

my favourite DJ Shadow track and played very loud when something pisses me off!