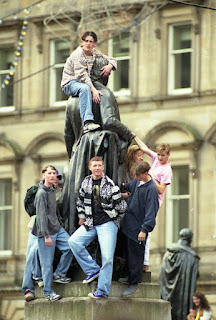 Digging out the John Prine track for yesterday's post inevitably led me to today's as it is a cover of a track from the Illinois singer's first album. This particular rendition comes from a gig that I have mentioned a couple of time before on the blog, the Big Day, June 3rd 1990 when between 250 000  and 400 000 revellers wandered about various venues in Glasgow and caught some of the largest pop and rock acts of the time at George Square, Glasgow Green, The People's Palace and Custom House Quay on the Broomielaw where some of us were lucky to if not wholly witness at least hear the coming together of a major rock,  star an indie heroine and the Big Nosed Bard from Barking covering Hello In There as well as earlier catching Aly Bain giving it big licks on his fiddle,

What a day that was!

Natalie Merchant had recorded Hello In There as a b-side to the 12" version of Eat For Two the previous year but I have always thought that the backing was way to jaunty for the song. See what you think.

One of the saddest songs ever. John Prine is one of the greatest poets of all time. There ought to be statues of him all over the USA.

A legendary day that was. Wish I could have been there.

Nice one Drew - cannot believe I missed that