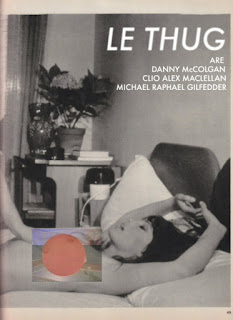 This is one to just sit back and let flow over you. Sense In Scotland was one of three tracks by Le Thug to be featured on Song By Toad's second split 12" ep of sessions recorded in Mathew's flat in Edinburgh. The 12" was released on RSD 2013 as an experiment to find out which was more popular beer or records which I wrote about here. Would you call this track shoegaze,(a term I never really had much time for), ambient, experimental or something else? I'm not sure I just think that it is rather fine like most thing recorded by Le Thug.

I am not sure if the band is still a going concern, I do hope so , as events conspired against me ever getting to see them live and I still hold out hope that one day Swam, a track I consider one of the finest of the past decade, will get a proper physical release one day and not just live on my hard drive.

Loved Swam, looking forward to hearing this one.