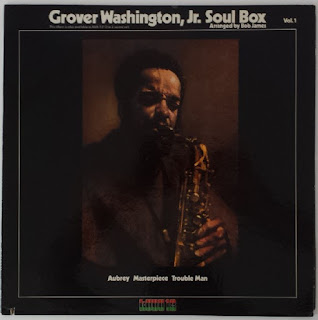 WARNING - CONTAINS A LOT OF SAX - JC should maybe avoid this one.

The original version of  Masterpiece was recorded by the Temptations but was really more a vehicle to show the abilities of Norman Whitfield as a writer and producer as it only contained 3 minutes worth of vocal in it's thirteen and a half minute running time. The track was the title track of the Temptations 1973 album released on the Gordy label and the final album by vocal the group to be recorded in Detroit. I much prefer the version by the Jazz-Funk saxophonist Groover Washington Jr from hos excellent 1973 album Soul Box 1 from the same year as the original and which also contains an amazing extended cover of Trouble Man.

An unexpected treat Drew. I haven't heard this in many many years. Fabulous, thanks for digging it out.

Lovely stuff. It probably says something about me though that your warning actually encouraged me to listen!