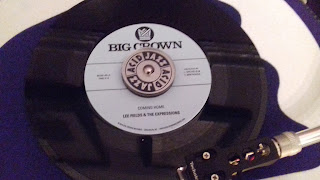 This is absolutely gorgeous, timeless soul from  Lee Fields, the man nicknamed "Little JB" as they say he resembles and sounds like Soul Brother No , I'm not that sure about either. Fields released his first single back in 1969 nand has been recording ever since. The stuff  that he has done in conjunction with the Impressions since 2010 are particularly good this single was released on Big Crown Records last year.