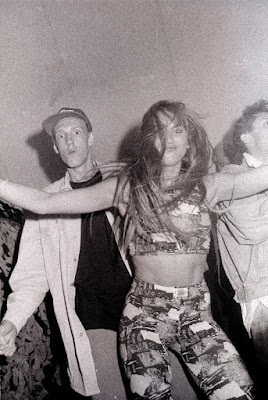 I was on a bit of a downer already this week what with getting a year older. some say it's only a number but I think those folk are all in denial or deluded or both. What has really depressed me is that while trying to find a track for today I realised that it's thirty years since the only "summer of love" that mattered, well for me anyway. I think that I uttered more than one sweary word when tis dawned on me. I am not going to get all dewey eyed and sentimental but fuck! it was a good summer and the music was bloody magic. Sharp As A Knife is a track that I listened to quite a bit back then and still sounds good to me. Even in the age of the information super highway I know no more about Brandon Cook than I did back in the day. Roxanne Shante on the other hand was well know to me back then and one of my favourite rappers who could cuss with the best of them.

LAst game of the season tomorrow and Airdrie are at home to Forfar Athletic in what is a bit of a meaningless game but it would be good to go finish with a win. Last year I was accompanied to the final home game with some of the International Chancers Brigade and we were hoping/praying for a win to secure a play-off place so the atmosphere will be a little different tomorrow. I will have a pie and possibly a full fat Irn Bru in Brian's honour and think of the other two, SA and Walter who are used to watching their teams in much larger crowds than we get at the Excelsior.

Brandon Cooke and Roxanne Shante - Sharp As A Knife (Acid Attack)
Posted by drew at 08:00

I had a good time at the Excelsior, bouyed by my hangover not being anywhere near Brian's. Enjoy your pie.

C’mon, fellas, end the season on a high note for our pal Drew.