I Tell No Lies 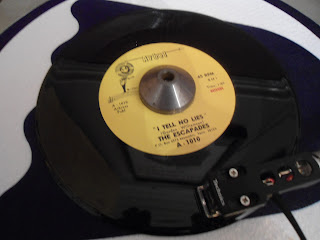 I am beginning to question if all of the garage records that are said to have been released in 1966 were actually released in that year as it would appear that most of the good ones that I have are from that year. Or is it a case that when these records were re-discovered the year was just guessed at due to similarities with records released that actually have years on the label?

I have no reason to question the validity of today's release as it has been confirmed by the keyboard player Ron Gordon that I Tell No Lies was released in January 1966 on local Memphis label Arbel and came to the attention of someone at Verve who signed the band but for some unknown reason did not release this powerful full on, organ and Rickenbacker driven song. The record that they did release on Verve Mad Mad Mad, is not a bad song but not nearly as good or distinctive as I Tell No Lies. The band dissolved the following year when two of the members fell foul of the draft and ended up in Vietnam.