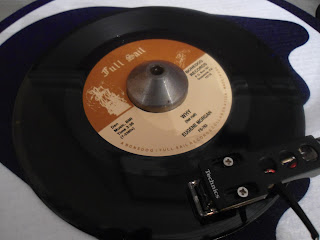 Last week while attempting the mammoth task of painting our hall, stairwell and upstairs I fired on some cds that I hadn't listened to in ages including the most excellent "For Millionaires Only " series from the Goldsoul label, volumes 1 through four. As the title suggests these records if bought seperately on 7" vinyl would cost an absolute fortune, all being at least in three figures many in the thousands . While playing  volume four a song came on which was really familiar but which sounded a bit on the fast side, so I consulted the cover to be informed that the song was "Why (I Want To Know) by Nat Hall and then I noticed that the next tune was also a version of Why this time by Willie Mason and All The Kings Men", that must be the version I'm more familiar with I thought and so waited for it to be play but the muffled version with the incongruous wah wah guitar was even less familiar than the previous song. So I played the  Nat Hall original again  but I was still sure that this was not the version that I knew. Over the next couple of days it bugged me and on Saturday I decided thast it was time to go through the northern boxes to find my version. I was sure that I had played it on vinyl and I knew that I didn't have a copy of the Hall version and after consulting the sleeve notes of the cd I was sure that it wasn't the Willie Mason release on Ka-La-Ma records as I had never heard of the label.

After quite a bit of rooting about the northern boxes I found the song on the flip side of a cover of It's Your Voodoo Working by Eugene Morgan on the Full Sail label. This version is slightly slower in tempo, a bit more moody and I think superior not least due to the organ solo to the other two versions.

And to compare and contrast.

Willie Mason & All The King's Men - Why

Thanks Drew, I really liked all three versions of that