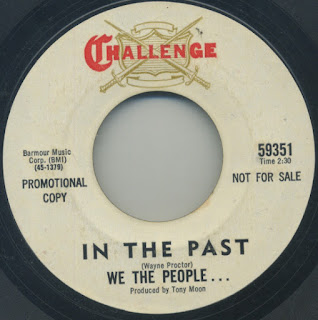 This is another garage track original where I wrongly thought that the later cover was the original. For years I thought that In The Past was a tune by the Chocolate Watch Band but it turns out that it was originally recorded in 1966 by We The People as the plug side of their fourth single, however the local radio station preferred the rather "wet" in my opinion, flip St John's Shop making it a hit in the Orlando area, if no where else. I can't quite understand this as In The Past is a cracking tune and is a hell of a lot better than the later cover.

Glad you're enjoying it Big Ed.

had to check that twice. thought you were blooging about a song called 'We Are The People'. I was concerned......