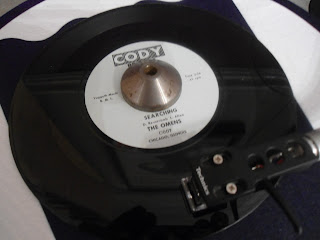 Another great piece of fuzzed up Garage Rock for you today. The Omens were from Hammond, Indiana not that far from Chicago. Searching was recorded in the Windy City not in a studio but in the living room of a second floor flat on an Ampex Reel to Reel in mono,  in one take and all the better for it. It was released on the Cody label backed with another original song Girl Get Away. in 1966, a vintage year for this kind of music. The band recorded another single, a cover of  As Tears Go By and like most bands from the Garage rock scene of the mid 60s split leaving a very slight recording legacy but one very rare, in demand blistering single.

I completely agree 1966 was a magical year for music. As someone who has driven through Hammond many many times in my life, it's funny to think a band like the Omens could have been playing such a great brand of garage rock while living there. Not a place you need to visit if you find yourself in the Chicagoland area.